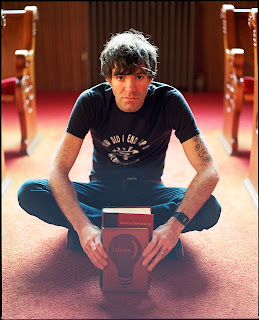 My name is Stephen Kellogg. I’m thirty-six years old. I say that I’m from Northampton, MA because that’s where I got my start, though now I live in Southern Connecticut. I’ve spent the better part of the last ten years on the road or in the studio, but I have four daughters and a beautiful wife too. I asked if I could write my own biography, partially because it saves money, and I figured if someone wanted to learn about me, I’d just as soon tell them myself.

My music has been described as Americana, Country-Rock, Folk, Singer/Songwriter, and, somehow, pop. I have always thought of it as American-rock n’ roll. It’s a product of my father’s record collection, from Jim Croce and Cat Stevens to Eagles and The Band. Somewhere along the way, I fell in love with showmanship and acts that put on great concerts. Sometimes that meant Van Halen, other times it meant the Grateful Dead, and most recently it’s probably more to do with John Prine. For what it’s worth, Tom Petty is my favorite artist. Although it’s been pointed out to me by one quite popular publication that I’m “no Bruce Springsteen," I’ve decided to continue making music anyway (I’m laughing as I write this in case that’s not clear).

The thing is…I fell into this job. I like people. I like sharing a world-view. I don’t mind singing and playing guitar, but I never expected that I’d do it for a living. Like a lot of folks, I think I just figured I wasn’t good enough or that maybe it wasn’t possible. The fact remained though that I needed a way to provide for my family, presumably just like those of you reading this biography (or for the younger generations, the same way your parents have). Ultimately writing songs and playing them for people has become that living. There are many occupations for which I have immense admiration - doctors, soldiers and teachers topping the list. But there isn’t another job I think I’d necessarily be suited for, so this is what I do.

In November of 2012, my band of the last ten years decided to take a hiatus. We performed our final show at Webster Hall in New York City for three hours and said goodbye for now. 2012 also took with it my mother-inlaw and my grandmother. Most of this happened in late Spring, when my house was under renovation; the foundation was still there, but the house was literally ripped apart. Some metaphor, huh? 2012 was a year of change if nothing else. The musical result of this tumultuous period is Blunderstone Rookery. The title comes from the boyhood home of my favorite character in my favorite book, “David Copperfield”. I produced Blunderstone Rookery in conjunction with my long-time musical collaborator, Kit Karlson. Mike Mogis (Bright Eyes, Monsters of Folk) mixed the album.

We chose to make the record in Bridgeport, Connecticut because, after making the last few in Los Angeles and New York, I really wanted to work on home turf. The music was played by a number of friends of mine, some of them play in bands you may have heard of (Travis McNabb and Annie Clements from Sugarland, Sean Watkins from Nickel Creek, Jerry DePizzo from OAR), and many of them, including me, you may not have heard of. I loved working on Blunderstone Rookery more than any album I’ve ever made and it’s my ninth studio effort. It was a fresh process. One that began with the exciting notion, “what if I say exactly what I want to say” and ended with me handing my father a vinyl copy to add to his record collection.

That, after all, is why I do this. Using words and intention in the hopes of a positive legacy for my family.