The valley doesn't have to wait any longer for Paula Cole, who plays the Iron Horse Friday, January 18th 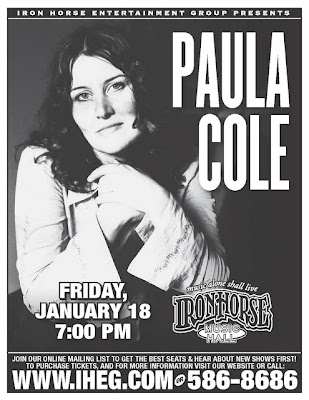 All of the uncertainty of going independent for the first time is history for Paula Cole. Her fans’ support helped make her first do-it-yourself album, “Raven,” a reality. The disc will drop this spring.

Cole will preview tracks from the forthcoming project Friday, January 18th at 7PM at the Iron Horse in Northampton flanked by guitarist Mark Erelli, who's back at the Horse with Antje Duvekot  two weeks later on Friday 2/1.  Paula is pleased her followers made her latest project a reality.

“My fans are tremendous,” Cole says. “I can’t thank them enough. They’ve enabled me to put out more music.”

“Raven” is reminiscent of her 1994 debut “Harbinger,” which is full of intimate, poignant and bittersweet cuts.

“There is definitely a connection between the two albums,” Cole says while calling from her suburban Boston home. “I think it would be a good idea to play some songs from ‘Harbinger’ on this tour. They would certainly fit. Of course, I’ll also play the songs people expect me to play.”

“Where Have All The Cowboys Gone” and “I Don’t Want To Wait,” which was the opening theme for the ’90s television series “Dawson’s Creek,” will be rendered.

“That song was obviously huge for me,” the multiple-Grammy winner says. “It bumped me up to this incredible level that I never imagined. There was the good and bad with that. More people discovered me, but all that goes along with it didn’t necessarily fit with my introverted self.”

The vocalist-pianist is hardly a careerist. Cole did the unthinkable in 2000, just two years after winning the Grammy for best new artist. She took a seven-year hiatus to have and raise her daughter Sky.

“You don’t see that too often these days,” Cole says. “It’s about getting bigger and bigger for some. I just decided to go with what’s most important. I don’t regret the decision to be at home for those years one bit.

“But I’m back now, and my daughter will miss me cooking breakfast for some mornings, but she understands.

“This is what I do. I’m a musician, but I’m also a mother. Life gets complicated, but it’s fine. I’ve made a couple of decisions a lot of people wouldn’t have made.”

That includes turning down a deal from a jazz label during the late-’80s in favor going to college.

“I didn’t want to sing other people’s songs,” she says. “I wanted to sing my songs. I do what I have to do. I ultimately make the decisions and I think I’ve made some good ones.”